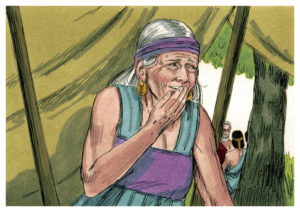 Sarah laughs at the seemingly impossible

Are there passages in the Bible that made you laugh out loud when you first read them? Or even the second and third times?

These stories did it for me:

When the angel of the LORD appeared to Gideon, he said, “The LORD is with you, mighty warrior.” Judges 6:12. What irony for Gideon to be referred to as strong? Though the angel thought of him as great, Gideon thought of himself as the least. “Pardon me, my lord,” Gideon replied, “but how can I save Israel? My clan is the weakest in Manasseh, and I am the least in my family.” And indeed he was cowardly hiding himself in a winepress while threshing wheat so that the Midianites did not see him. (Nice story of God’s power working in weakness)

“The Lord your God is with you, the Mighty Warrior who saves. He will take great delight in you; in his love he will no longer rebuke you, but will rejoice over you with singing.” Zephaniah 3:17. This gladdens my heart, you cannot rejoice without smiling. How does God smile, and what does the voice of God sound like? I can only imagine.

“Jehoram was thirty-two years old when he became king, and he reigned in Jerusalem eight years. No one was sorry when he died. They buried him in the City of David, but not in the royal cemetery”.

What kind of man was this who had no one to mourn for him? Couldn’t they have credited him with even one good deed? No one writes this kind of stuff in eulogies I have read.

4.      “And Sarah said, God hath made me to laugh, [so that] all that hear will laugh with me. Genesis 21.6 Would you not have laughed with the old lady hearing seemingly impossible things?

“A quarrelsome wife is like a constant dripping on a rainy day. – Proverbs 27:15 NIV

“Be patient and you will finally win, for a soft tongue can break hard bones” Proverbs 25:15. Soft tongue and hard bones?

“And it came to pass, when he began to reign, as soon as he sat on his throne, that he slew all the house of Baasha: he left him not one that … against a wall, neither of his kinsfolks, nor of his friends.” 1 Kings 16:11 KJV

“Therefore Hanun took David’s servants, shaved off half of their beards, cut off their garments in the middle, at their …, and sent them away”. 2 Samuel 10:4 NKJV

“The hand of the LORD was against the city with a very great destruction; and He smote the men of the city, both small and great, and they had … in their secret parts”. – 1 Samuel 5:9 21st Century King James Version

Then said they, “What shall be the trespass offering which we shall return to him?” They answered, “Five golden … and five golden mice, according to the number of the lords of the Philistines; for one plague was on you all and on your lords.  Therefore ye shall make images of your …and images of your mice that mar the land, and ye shall give glory unto the God of Israel. Perhaps he will lighten his hand from you and from your gods and from your land. – 1 Samuel 6:4-5 21st Century King James Version